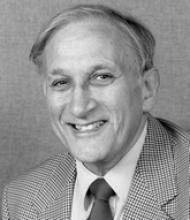 Issy Kolvin was one of the leading psychiatrists of his generation. Having qualified in medicine in South Africa, he came to the United Kingdom to start a research career which generated five books and many learned articles and chapters.

His contribution was recognised early when, aged 35, he was appointed head of the Nuffield Unit at the University of Newcastle upon Tyne, transforming the unit into an international centre of excellence, for which he received a Personal Chair in Psychiatry. His work there included the direction of the seminal 1,000 Family Study, a long-term study of Newcastle families, which enhanced understanding of the transmission of deprivation, criminality and mental illness across generations.

Issy was profoundly affected by his early life experiences. The loss of a father and consequent poverty was compensated for by a loving mother and sisters, who fought hard to ensure that he completed his education. The notion of “protective factors”, the reasons why people are able to cast off the shackles of their deprived backgrounds, underlay much of his later work.

At the age of 61, when most professionals are winding down, Issy was appointed to a Chair at the Royal Free Hospital and the world-renowned Tavistock Clinic in London. There, he married his own expertise in quantitative research with the pioneering psychotherapy work of the Tavistock. While building a new academic department of child psychiatry he directed key research on the benefits of psychotherapy for depressed and sexually abused children, and established links between being abused and becoming an abuser. This work continued for nearly 8 years after his official “retirement” and even through a long battle with leukaemia. His service in London resulted in an Honorary Doctorate from the University of East London some weeks before his death.

He was a man who gave unstintingly to his profession, both at home and internationally, working with many professional and governmental organisations and editorial boards of learned journals. His service to the Royal College of Psychiatrists in particular extended over 30 years, for which he received an Honorary Fellowship.

Issy Kolvin was a modest man and a team player, a key aspect of his success being his willingness to allow others to take credit for work he originated. He quietly promoted the careers of junior associates, and fostered their talents, acting from a deep human warmth and respect for others. As a result, he was widely liked, respected and admired within his profession.