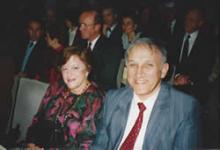 Tribute by Rt Hon Dame Elizabeth Butler-Sloss DBE
Professor Israel Kolvin made an invaluable contribution to the field of psychiatry and in particular child psychiatry. I first met him professionally in 1987 when I chaired the Cleveland Child Abuse Inquiry.  The remit of the Inquiry was to look at the manifest deficiencies in the response of the relevant disciplines to the allegations of child sexual abuse and in particular the removal of over 120 children from their homes in connection with these allegations.
View the tribute to Professor Kolvin by Right Honourable Dame Elizabeth Butler-Sloss DBE

Tribute by Right Honourable Lord Justice Thorpe
In my view Professor Kolvin, of all the many child and adolescent psychiatrists who have contributed to the protection of children through the family justice system, has made the outstanding contribution.  For many years he took on difficult cases during his Newcastle appointment and subsequently after his move to London.  Almost invariably his recommendation laid the foundation for the judge’s order.
View the tribute to Professor Kolvin by Right Honourable Lord Justice Thorpe

Retirement article in The Bridge
During his three years as Chair Professor Issy (Israel) Kolvin has witnessed and presided over major changes in the Association and is due to retire at the Annual General Meeting.  Born in Johannesburg in 1929 Professor Kolvin was the youngest of five children.  His father died when he was only six but the loving nature of his family which extended to others less fortunate proved a lasting influence.
Download the full retirement article from The Bridge